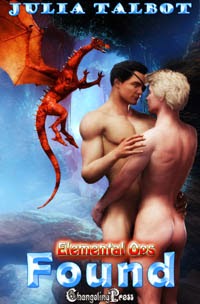 Elemental Ops has been dealing with good dragons and bad guys for just long enough that they think they might survive. Second-in-command Jack learns to bond with his dragon companion, Serena, just in time for all hell to break loose again in the form of government analyst Lane, who shows up at the dragon stronghold to find out why the team went AWOL. Jack's got his sense of humor, and his lusty appetite, back just in time to handle Lane while the other Ops members are still on the mend.

Lane knows he's only on this assignment because he screwed up his last mission. What's an analyst doing on missions anyway? Sexy agents like One-Eyed Jack are not for him, but he can't deny their instant connection, or his new bond with baby dragon Geri. Can Jack and Lane figure out how to keep his new family safe from the government bureaucrats who want their hands on the dragons, and the Ops team? 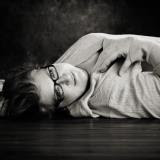 Julia Talbot lives in the great Southwest, where there is hot and cold running rodeo, cowboys, and smoked brisket. A full time author, Julia has been published by Torquere Press, Suspect Thoughts, Pretty Things Press, and Changeling Press, among many more. She can most often be found in coffee shops and restaurants, scribbling in her notebook and entertaining other diners with her mutterings.
WEBSITE *** TWITTER *** FACEBOOK *** BLOG ***GOODREADS *** NEWSLETTER
Posted by AuthorIsland.com at 4:00 AM